Share a memory
Obituary & Services
Tribute Wall
Read more about the life story of Charles and share your memory.

Charles “Charlie” Peters, age 101, of Salem, NH passed away peacefully at his home with his family by his side on Monday, January 2, 2023. Charlie was born on October 25, 1921 at his family home in Salem, the son of the late James and Agnes (Garabedian) Peters. He was raised and educated in Salem and attended #8 School and Woodbury High School. Charlie served his country in the U.S. Army during World War II. He received a Purple Heart for wounds sustained during a battle in the Rhineland in Germany. Charlie was honorably discharged after the War ended.

Charlie was born and raised on Peters Farm in Salem. Initially he worked the family Farm with his father and brother Ora. Over time his father and brother retired. He was subsequently joined by his sons Michael, John, and some of his grandchildren. Into his 90s Charlie continued to work on the Farm, helping out any way that he could, even driving tractors on the Farm, until his “retirement” a few years ago. His life’s work and passion were working the land, providing for his family, and delivering a quality product at a very reasonable price to the Community.

When Charlie wasn’t working the Farm, he enjoyed watching murder mysteries like Sherlock Holmes. He enjoyed playing 45’s and Whist with his family. He was an avid Chet Atkins fan. In his youth, Charlie had played the guitar and harmonica. He enjoyed taking drives to see and admire other local Farms in the area over the years. Charlie stayed very active. He would run around the outside of the Mall at Rockingham Park until well into his 60’s.

Charlie was a very humble and honest person. He was a man of integrity, loved God and cared very much about others. Charlie walked the talk. He was a very devout Christian dedicated to the Bible and his faith.

Charlie was predeceased by his wife of 71 loving years, Gloria (Mooshian) Peters in 2019.  He is survived by his daughter, Susan Knight and husband, Paul; son, Michael Peters and wife, Kathy; and son, John Peters and wife, Ellen, all of Salem, NH. ; Grandchildren - Ryan, Bethany, Matthew, Caitlin, Daniel and Charles; and Great-Grandchildren - Rhys, Noah, Olympia, Lyla, Charlie, Benny and Nora.  All of his siblings predeceased Charlie.

Charlie will certainly be missed by all. May he rest in peace!

There are no calling hours. Services and burial with U.S. Army Military Honors will be private.  Memorial contributions in Charlie’s name may be made to The New England Bible Church, 60 Chandler Road, Andover, MA 01810. 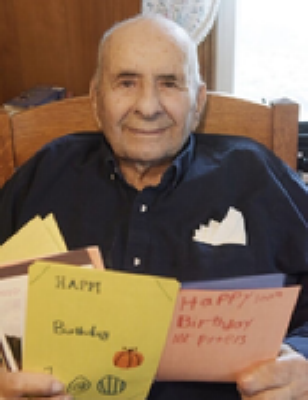